I don’t know about you, but sometimes I find gift shopping can be something of a challenge.

It’s not the ‘buying’ of the gift that I find challenging, or the wrapping, or any of that malarky, it’s coming up with an idea in the first place. Just what do you buy your cousin Edwina, the woman who seems to have absolutely everything?? It’s the stuff of nightmares. Many sleepless nights. Perhaps both.

If you’re anything like me the days roll past and before you know it, you’re roaming the aisles of your local shopping centre, desperately hoping inspiration will jump out, shake you by the shoulders, and end it all.

Well relax. This year inspiration has chosen to send you an email. Or a tweet. Or however the heck you stumbled across this blog post. Consider the following…

You see! And I know what you’re thinking – it’s so obvious now I’ve come to mention it! And here’s something else, books signed by the author are even more special. Ha! No more crappy I-didn’t-know-what-to-get-you-so-I-got-you-this-voucher from you! You’ve just become a master of ‘thoughtful’ gifts.

Now where on earth can you lay your hands on a signed book or two?

Right here is where!

With just a click of your mouse, or a tap of your finger, any one of the five books I’ve penned could be winging their way to you with a personalised greeting inside, or a simple ‘Best Wishes’ if you want to keep your options open. Simply drop me a line via the Stay In Touch page, then select the book, or books, of your choice from the links BELOW. 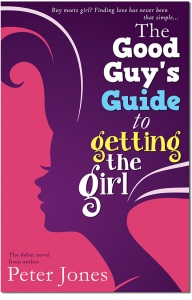 The Good Guy’s Guide To Getting The Girl

My debut novel… if your gift-recipient likes chick lit Rom Coms in the style of Nick Hornby or Mike Gayle, this could well be right up their street.

How to Start Dating and Stop Waiting

If they need a real guide to getting the girl, or guy, this is it. Written for everyone who’s ever found dating a challenge, dating websites to be less than fulfilling, or ‘first dates’ terrifying… How To Start Dating And Stop Waiting will help them dodge the liars, & Lotharios, and have them dating Mr or Ms Right in no time.

How To Be even more Attractive

The smaller, quirkier, companion guide to the previous title. Let me fix those underlying problems that make your otherwise attractive charming gift-recipient even more attractive to those they’d like to date. 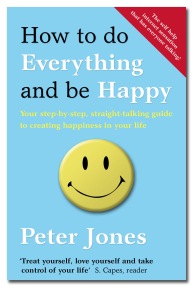 How to Do Everything and Be Happy

The book that started it all: ‘How To Do Everything and Be Happy’ is a book for ordinary people. With ordinary lives. It’s for people who have been ambling along and wondering why they’re not – well – just that little bit happier.

How to Eat Loads and Stay Slim

And finally.. How To Eat Loads and Stay Slim. It isn’t a diet book. Not in the traditional sense. It’s a book packed full of thought provoking, scientifically-provable, ideas and changes you can make to your life to increase your chances of being slim. Now that’s a gift that keeps on giving!

Yesterday saw the launch of my third (or is it fourth?) How To book – How To Start Dating And Stop Waiting. It’s available now in paperback, as an ebook, and (once I’ve finished recording it), as an audio download from audible. Pop along to amazon  and select the format of your choice. In the meantime, here’s an excerpt from the opening chapter…

On my thirty-second birthday, as I sat at my mother’s dining room table in front of a large cake, thirty two candles threatening to ignite my beard should I lean too far forward, I realised that the only ambition I had left in life – the only dream I hadn’t given up on – was to be married.

Or at least in some sort of steady, loving relationship.

A long term partnership with someone whose ying was a close match to my less than melodic yang.

But even this, this last naive expectation of life, was looking increasingly unlikely. Every candle on that cake was some sort of burning epitaph to just how utterly rubbish I was when it came to affairs of the heart.

There had been relationships in the past – of course there had – but I’d kind of ‘fallen into them’, by accident. And after the ladies in question had tried, and failed, to mould me into the kind of man they actually wanted, those relationships had withered and died. There hadn’t been an ‘accidental relationship’ for a while. Colleagues no longer described me as an eligible bachelor. Some had started to question my sexuality.

So as my family launched into a rendition of ‘Happy Birthday’ I decided there and then that the prospect of being single for the rest of my days was unacceptable.

Something had to be done.

Around that time there was a BBC TV show called ‘Would Like to Meet’ where a team of experts (a flirt coach, an actor, and an image consultant) would take some hapless individual and turn them into a heartthrob or a man-magnet. It very quickly became my favourite TV show. I’d watch it avidly from one week to the next hoping to pick up some tips. And the conclusion I came to was that I too could do with a similar makeover – albeit without the entire viewing nation of the United Kingdom looking on.

So over the next few weeks I tracked down Image Consultants, and contacted one. Back then, Image Consultants mainly worked for corporations, re-styling senior corporate executives who might otherwise look less than sharp in the boardroom, but I had surprisingly little problem persuading my consultant of choice to broaden the scope of her client base to include one sad and lonely thirty-something guy. She took one look at me, threw away every item of clothing I’d acquired in the previous decade, and in an afternoon gave me some much needed va-va-voom, in the wardrobe department.

And once I’d been completely re-styled, I looked around for a flirt coach.

These days, you can barely move for self-styled relationship experts and flirt coaches – heck, I’m just about to tell you why I’m one of them – but back in 2003 I could find just one. And she ran courses.

I took several hundred pounds from my savings, and booked myself on a ‘flirting weekend’. Nervously, I took my place in the front row, and when instructed I turned and introduced myself to the stunning blonde sitting next to me.

And I was smitten.

The course wasn’t that much of a success, in that it didn’t teach me how to flirt. Not that it mattered. My strategy had worked, somewhat differently but infinitely better than I’d hoped. On the Monday evening Kate and I had our first date. By the Tuesday I’d officially found myself a girlfriend. A few months later I found myself on one knee. And a year to the day after we’d first met, I found myself married.

Two and a bit years later I lost Kate. To a brain haemorrhage. At Stanstead airport.

And when the dust settled – when I adjusted to a world without my wife – I was single again. The loneliness returned. And though I’ll never be able to replace my beautiful blonde, I needed to fill the space that she’d left.

Something had to be done

It’s my considered belief that ‘dating’ – whether that be online dating, speed-dating, “hey – what’s a nice girl like you doing in a place like this?” dating – is similar to job hunting; it’s just as brutal, many times more frustrating, and potentially far more heartbreaking.

And just like job hunting nobody wants to become ‘good’ at dating. To get good you have to do lots of it, and the very fact that you have to apply for a lot of jobs – or go on a lot of dates – raises more questions than it answers. It’s not really something you want to shout about. Never the less, I was determined. There was no way I wanted to return to the way things were, before Kate, life’s just too damn short. So date I did.

Many, many, many times.

And finally, after years and years of being completely useless at finding romance, I cracked it.

There’s love in my life again.

Just as there can be in yours.

Welcome to How To Start Dating And Stop Waiting.

If you’ve been sitting around, on your own, telling yourself you should really make an effort and ‘get out there’, this book might be for you.

If you’re already dating – or you’ve tried it – and you’ve encountered nothing but liars and Lotharios, started your own personal collection of dating disaster stories, all whilst beating off people you wouldn’t normally look twice at, this book is probably for you.

And if you’d rather fast forward through the dating stage as quickly as possible, and find someone you’d like to have a relationship with – whatever type of relationship that might be – this book is most definitely for you.

But before you get too excited, let’s establish some ground rules. Buckle up and prepare to learn the hardest lesson this book has to give.

‘How To Start Dating And Stop Waiting’ is available NOW in paperback, as an ebook, and shortly in audio from audible.co.uk & .com
Visit amazon to purchase the book.

To celebrate the launch of the new book, get the companion guide, FREE for your kindle enabled device, NOW. But hurry. This is a limited, never to be repeated offer.

You don’t need a Kindle device to read a Kindle book. Download the FREE kindle app for your computer, smart phone or tablet from amazon (.co.uk | .com)