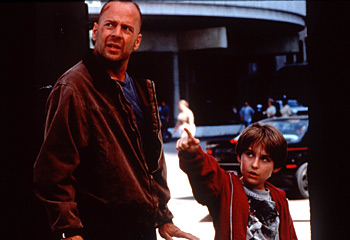 This week I finally got around to watching Mercury Rising. I have to say, this restored my faith in Bruce Willis somewhat after it was all but annihilated by Die Hard 4 (in the DVD extras Mr Willis actually says he’s not sure there’s anything more he can bring to the ‘action movie’ genre – a very telling remark).

ANYWAY, this film is brilliant. Based on a novel (the good films always are it seems), this is an old fashioned thriller with a hero you’re rooting for and a story you can believe in. It’s set in the 1980s and the whole film feels as though it was made twenty years ago and someone just found it – but don’t let that put you off, it’s a delight. The hideously misleading trailer is below or here if you fancy having a look.